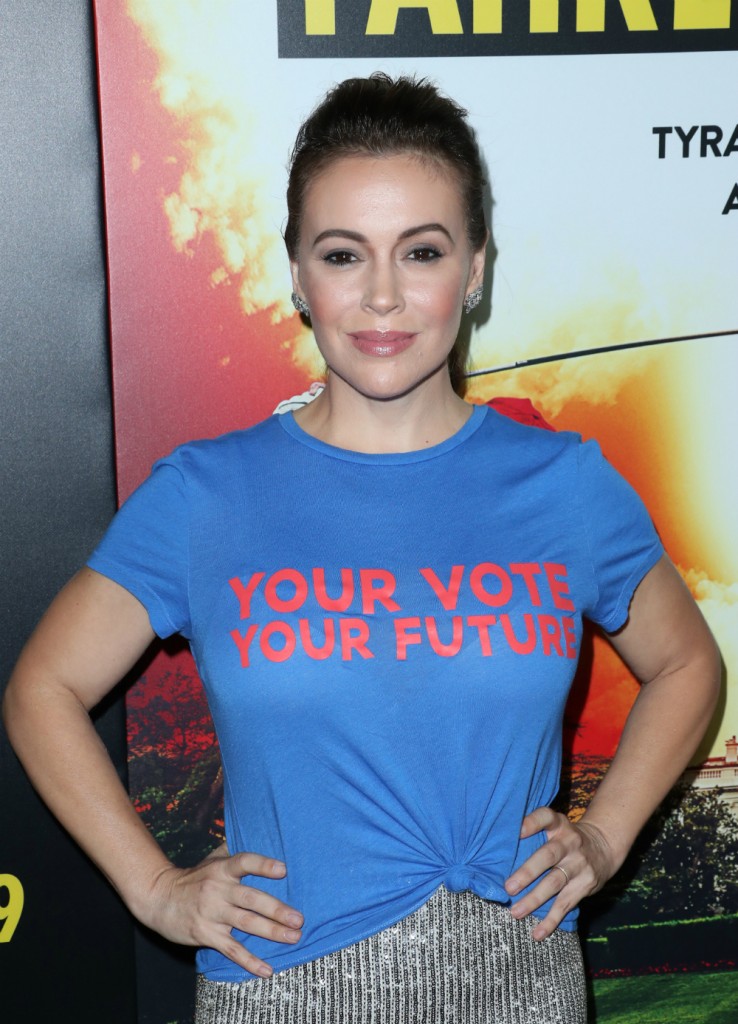 Dr. Christine Blasey Ford’s testimony in the Senate hearings last week was hard for many people. For survivors like Alyssa Milano and #MeToo founder Tarana Burke, who both attended the hearing, it was almost too much. But as we’ve seen in the days following that ridiculous circus, the fallout has been just as bad. As the Imposter in Chief alternates between claiming it’s a “really scary time” for young men and mocking Dr. Ford, his Minion Mouthpiece, Sarah Huckabee Sanders, wrote it all off by spewing about how he was, “just stating facts.” And like so many of us, when Alyssa heard Sanders egregious justification, she became, “filled with rage.”

According to President Donald Trump, it’s a “scary time” to be a young man in America. But Alyssa Milano reminded the country that women have been feeling that way for generations.

In an interview with MSNBC’s Stephanie Ruhle and Ali Velshi on Tuesday, the actress and activist slammed Trump’s remarks that young men should fear being falsely accused of sexual misconduct.

In his defense of Supreme Court Supreme nominee Brett Kavanaugh earlier this week, Trump said, “It’s a very scary time for young men in America when you can be guilty of something you may not be guilty of.”

Milano also spoke out against White House press secretary Sarah Huckabee Sanders, who denied that Trump had mocked one of Kavanaugh’s accusers, Christine Blasey Ford, during a rally in Southaven, Mississippi.

At the rally, Trump attempted to cast doubt on Ford’s statement that she’d had just one beer at a high school party where she says Kavanaugh drunkenly assaulted her. The president inaccurately suggested Ford couldn’t remember which part of the house she was in or what year it was.

“I’m filled with rage,” Milano said. “For Sarah to just go on and say, you know, he was just stating the facts.”

“What is happening right now is that we are defining boundaries, boundaries that have never been defined before,” she said of the backlash against victims who speak up about their abuse.

“We will not be silenced any longer. And if that means men have a hard time right now, then I’m sorry, this is the way the pendulum has to shift for us to have the equality and security in our country.”

I agree with everything Alyssa said and I’m glad she said it. Her sentiments aren’t new, most of us have been saying some version of “I’m filled with rage,” since #45’s campaign began. But the important thing to remember, like Alyssa said, is that we are defining boundaries and the pendulum is swinging. However, after days like yesterday and, most likely, today’s Senate vote, it feels like that stupid pendulum isn’t budging. It feels like nothing we do or say matters, like we are just shouting at a wall. And it is exhausting shouting at that wall. But when I read comments like Alyssa’s, I’m reminded that even the smallest voice can cause a fissure. So I appreciate Alyssa and Tarana and all the other women who have fought for survivors out there blocking that pendulum from going backwards and reminding me that every bit of rage is needed to push it in the other direction.