Emma Roberts: ‘Sometimes it makes me sad that I can’t have a private moment’ 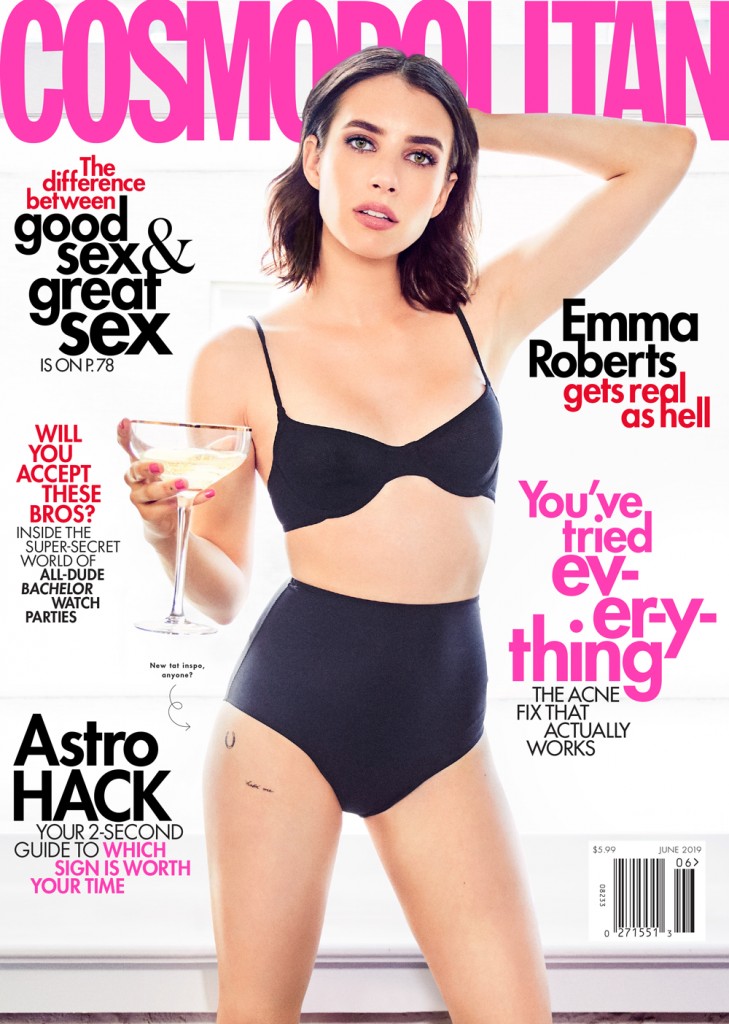 Emma Robert is Cosmopolitans’ June cover story, although I have no idea who that is on the cover. These photos look more like Alexa Chung than Emma. Emma voices Wedgehead in the new UglyDolls movie, which my daughter asked if we could go see on Sunday. Sure, babe – what mom wants mimosas and facials for Mother’s Day when she could be listening to Pitbull singing as Uglydog? But I digress. Emma landed the cover of Cosmo for UglyDolls and her upcoming season on American Horror Story, She is also set to come for her Aunt Julia’s crown in a rom-com titled Holidate, but that’s in pre-production. The interview’s overall theme is ‘Emma Undone’ and sounds like it was trying to expose the real Emma Roberts. It’s mostly half naked pictures and Emma trying to avoid giving direct answers, though. Emma’s romantic life has been, to put it nicely, messy. After splitting Hayden Christensen and Rachel Bilson up, and ending it with on/off fiancé Evans Peters at some point, Emma took up with Garrett Hedlund for a casual thing. But Emma doesn’t want to talk about that because it’s private. And the fact that it can’t stay private makes her sad.

On not wanting to talk about her relationships: I never want to talk about relationships I’m in or that are ending or have ended. It’s hard enough to be with someone by yourself, let alone with an audience…growing up is hard. Sometimes it makes me sad that I can’t have a private moment. Because of Twitter and Instagram there’s a whole other element where everybody can comment on what you’re doing, and no one knows the real story. That’s hard.

On setting the record straight about her love life: I think I know what’s true, and I know what happened in my own life, and so do the people that love me and who I love.
On how she deals with public speculation: I spend hours on the phone with my mom. She’s the best because she puts everything into perspective. She’s never once judged me. I also have the best group of friends. They come over and we lay in bed or talk, watch TV, or read short stories to each other. We open a bottle of wine. To me that’s the best, whenever anything is going on—to have everyone come over and be together.

On if ending a relationship is difficult: I think that no matter who you are or what you do or wherever in the world you are, anything ending is hard. Losing something is hard. And the only thing I can say for that is… What can I say for that? I’m realizing that life is highs and lows. I’m trying to ride them out and live somewhere in the middle. When you’re low, you think it’s never going to end. When you’re high, you’re so scared of it ending. And I’ve lived in both of those places for too long.

On having time to herself: It’s been fun to really choose how I’m spending my time. I’ve had days where I’ve woken up and I haven’t had to do anything other than what I want to do, and that’s been so fun. And something I’ve lost touch with over the years. To get to feel like time is mine is a really new thing for me.

I’ll admit the last bit got to me. I love my husband and my kids very much but the one thing I truly miss from being single is the luxury of living solely by my own agenda. Sure, it also got lonely, but I wouldn’t mind a day with the world shut out. That is also the only question I feel Emma gives a direct answer to. The rest of her responses are slow wanders around the question. As for having a private moment, that’s kind of two-sided. Sure, everyone should be a allowed to live their lives outside the fishbowl but let’s be honest, the main reason Emma’s moments are not private are because they are, as noted earlier, messy. I have a feeling the reason she won’t talk about why she and Evan broke up has a lot more to do with the reason than her desire for privacy.

However, I did learn something about Emma I did not know and am very interested in: Emma and friend Karah Preiss have an online book club called Belltrist that has a website, blog and Instagram page. They make recommendations, have live readings and author interviews and a bookstore network that supports local and independent bookstores. I quickly perused some of her suggestions and I like what I’ve seen. They put a lot of thought into the site and it’s quite obvious how passionate they are about this venture. Honest to Christmas, this is an Emma Roberts I can get on board with.

Emma Roberts Is Ready to Stand on Her Own, Be a Movie Star, and Wear Fewer Clothes https://t.co/IfvuOelFv2 pic.twitter.com/VsWUiuXUhU 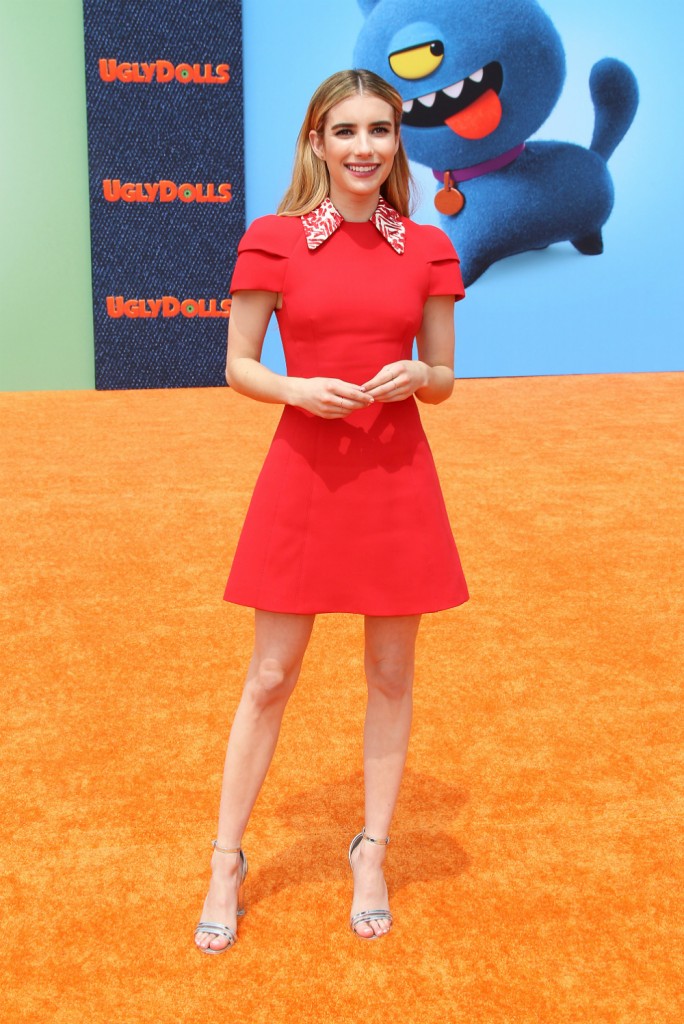 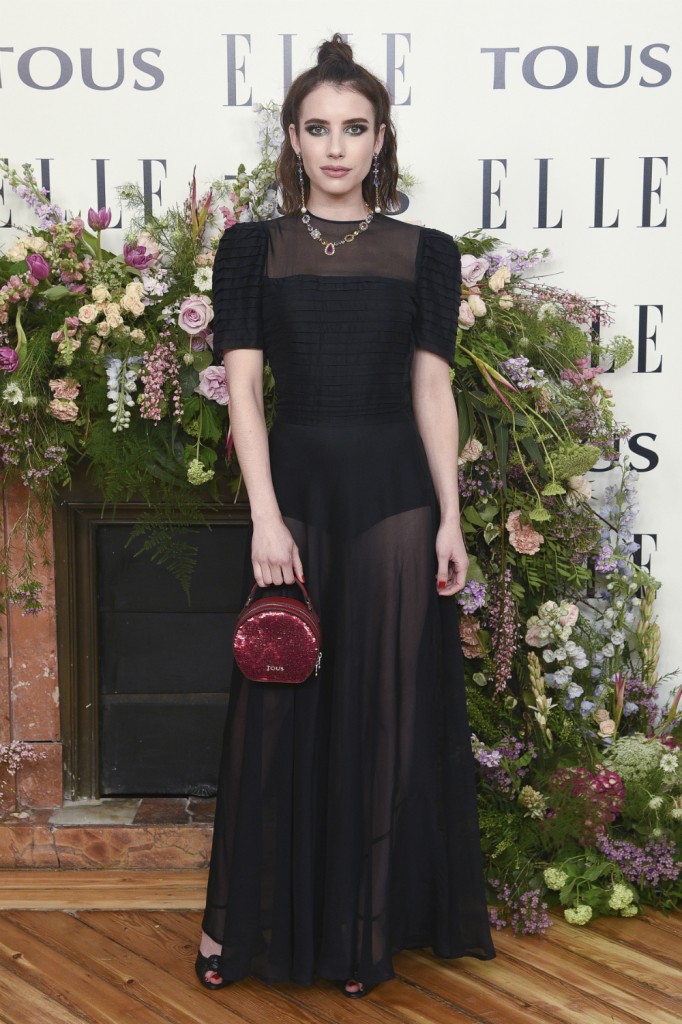 52 Responses to “Emma Roberts: ‘Sometimes it makes me sad that I can’t have a private moment’”