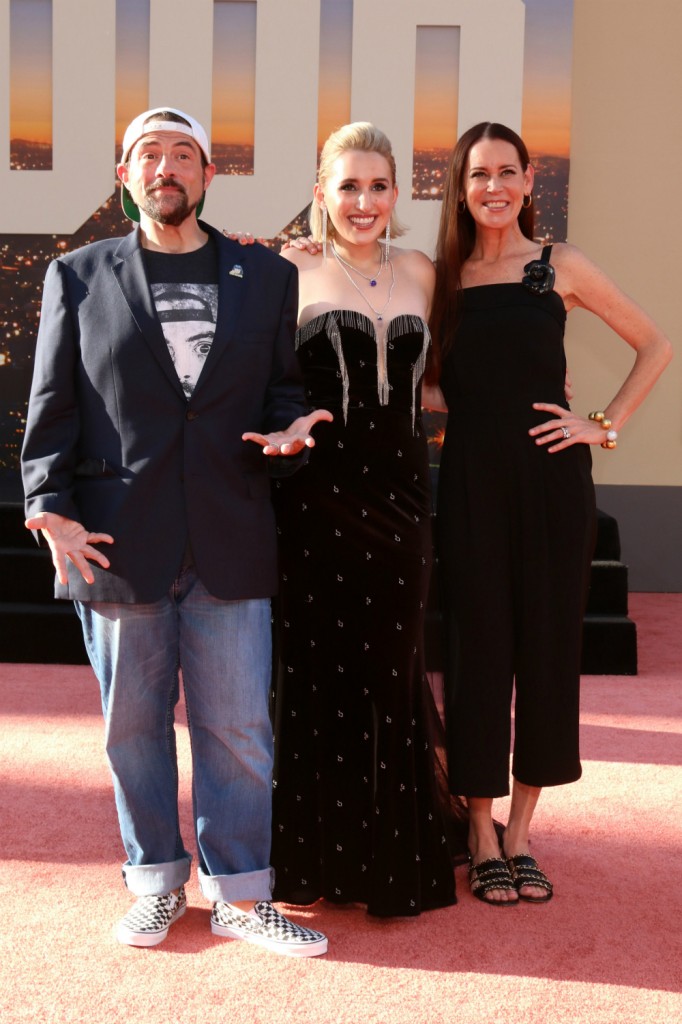 Kevin Smith suffered a near fatal heart attack – nicknamed a Widowmaker for it’s kill rate – at the start of 2018. Fortunately, Kevin realized how lucky he was to have survived and listened to the powers that be about changing his habits. In this case that was his daughter, Harley Quinn, who told her father he was a vegan now. She didn’t ask, she told him. Both dad and daughter spoke about the diet change at the premiere of Once Upon A Time… in Hollywood, in which Harley has a role.

Harley Quinn Smith is opening up about helping her father, Kevin Smith, after he suffered his massive heart attack in 2018.

“Once he had his heart attack, I made him go vegan,” she said. “That wasn’t so much advice, as it was, ‘You have to do this.’ I didn’t really give him a choice. There was no way that was not going to happen.”

“Going vegan isn’t hard, but it’s definitely something you have to get used to, being super aware,” Harley said of her father’s lifestyle change. “I’ve helped him through it, I’ve held his hand. It’s much easier to go through it when you have somebody.”

She continued, “When I went vegan, my best friend went vegan right before me, so she held my hand, and now I’m holding my dad’s hand for it. I’m really happy I get to be there for him for this.”

Kevin told PEOPLE at the Los Angeles premiere of Once Upon a Time in Hollywood that he “never imagined I would go vegan,” but the diet is working for him despite “f—ing hat[ing] vegetables.”

“Given a choice between a f—ing kumquat or an eggplant and nothing, I’ll choose nothing,” he shared. “So as a vegan, you wind up intermittently fasting by virtue of the fact that you’re like, well, none of this s— sounds appetizing right about now. You don’t do a lot of passion eating or boredom eating.”

I get where Harley is coming from. I think many of us have these interventions with our folks after health crises. My brothers and I watched my parents indulge in some destructive behavior, but they dismissed our concerns because it’s hard to break the parent/child dynamic, isn’t it? But once their health failed as a result, they’d lost their argument and we gave them ultimatums similar to Harley’s. I find it interesting that Kevin gave Penn Gillette’s book so much credit at the beginning. I would assume this was to deflect a “my kid doesn’t tell me what to do” kind of thing but Kevin doesn’t seem the sort. He worships Harley and loves heaping praise upon her. Maybe Kevin was worried he couldn’t stick with it. Or maybe Gillette’s book really is that good.

As I’ve said before, I have no problem with the vegan diet. I’m not even vegetarian but I’m not going to fault any diet that is nutritionally sound. But Kevin’s comment about opting for nothing over his food options makes me sad. I get that it’s his issue with vegetables (I also get that a kumquat is not a vegetable) but my biggest diet challenge is my love of food. I suppose if my options were to go vegan or die, I would choose the former, but taking the joy out of eating is just not something I want to entertain. No one has told me to lose 51 pounds to survive yet, but I have put on a lot of weight between perimenopause and stress-eating during the sale of our house. I’ve gotten to an unhealthy weight, so I need to do something. I’m returning to cooking (rather than eating out), moderation and exercise. And the reason I’m telling you all this is because I’m going to need a lot of help, my dear Celebitches. So when I speak of dry aged New Yorks, second glasses of wine or the new Bundt cake bakery down the street, be ready to throw some Harley Quinn tough love at me, okay? 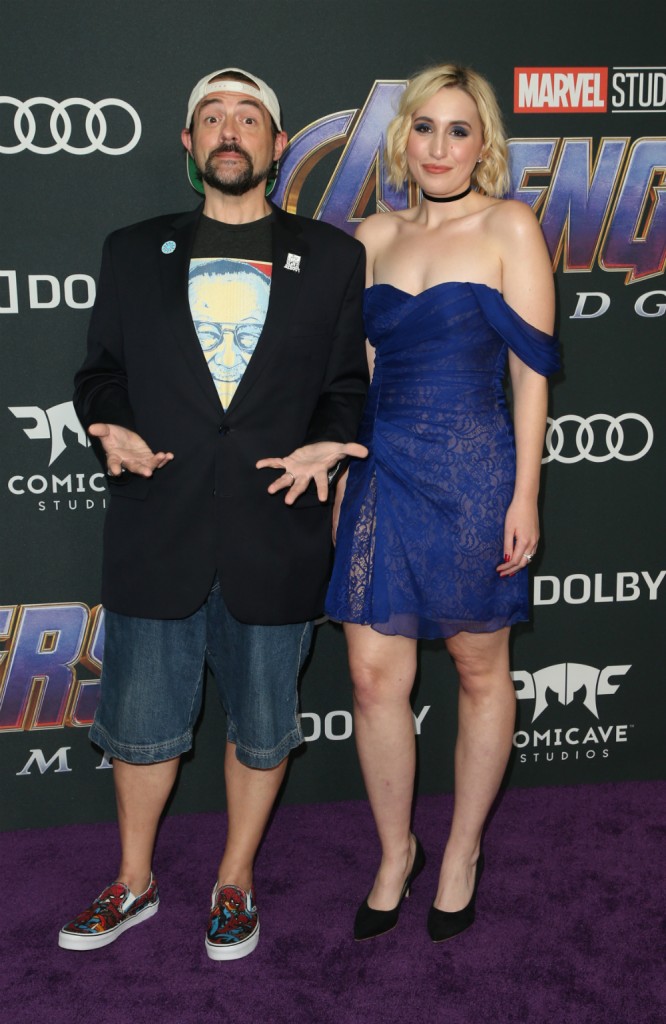 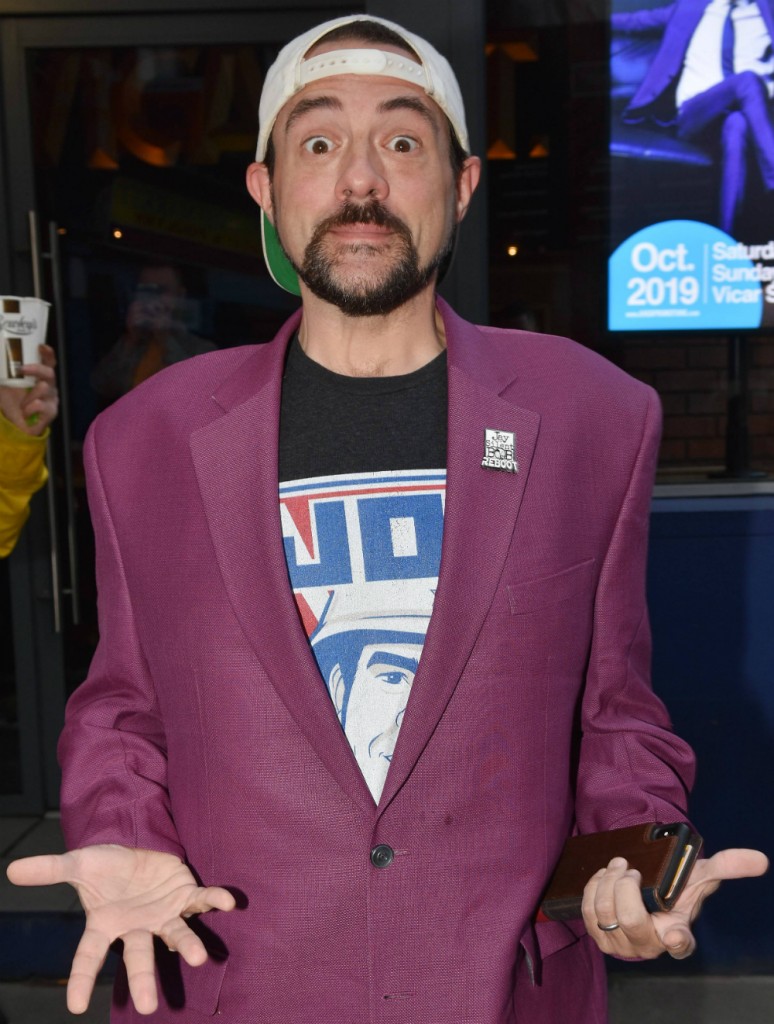 14 Responses to “Kevin Smith’s daughter made him go vegan after heart attack, he still hates vegetables”