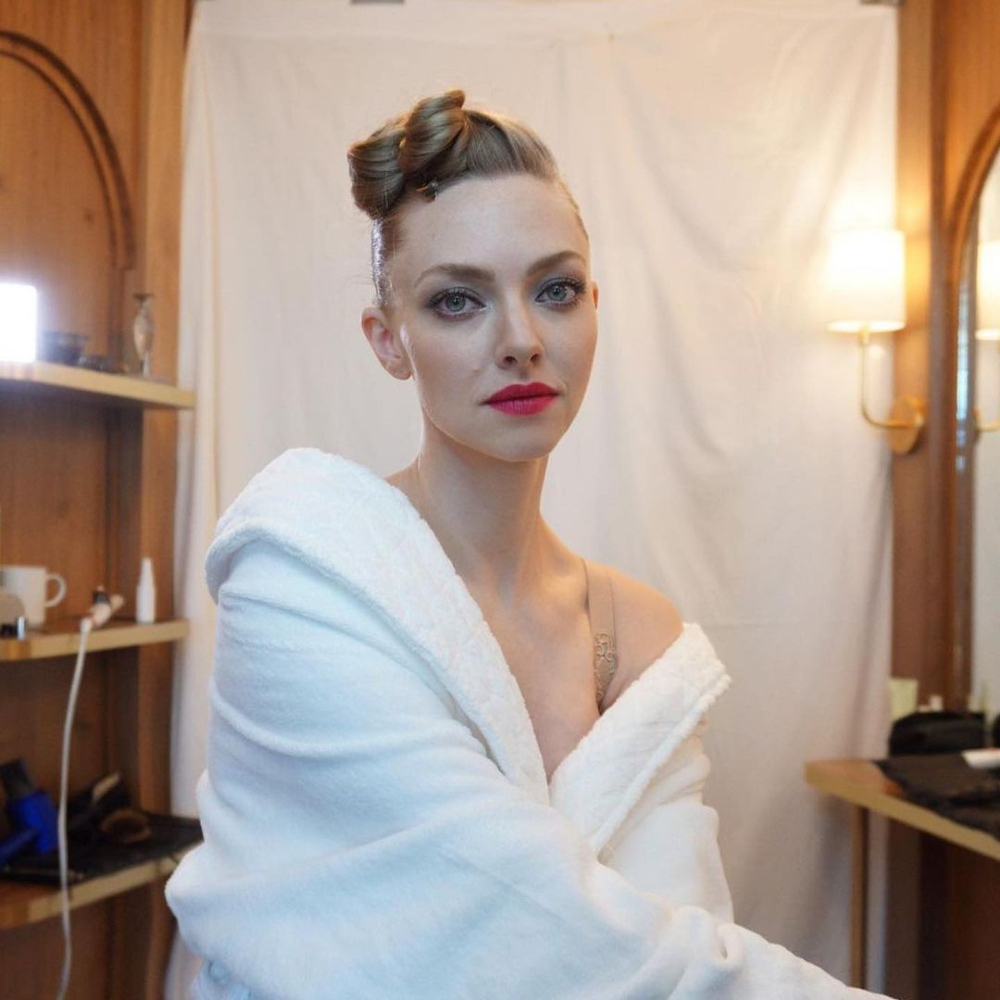 Amanda Seyfried is doing her last minute Oscar push before the ceremony next weekend. She’s still Zooming out of her barn in upstate New York but I assume she’s getting ready to fly out to LA since the Academy is insisting they’re too fancy to have people show up virtually. Since attendance is so limited, I hope its just going to be Amanda and her husband Thomas Sadoski making the trip and she leaves her kids at home with her mom, who is their nanny. The reason I hope Amanda leaves the kids at home is so she can get a good nights sleep, the poor dear. Amanda has two kids, her daughter, Nina, who is four, and her son, Thomas, who is six months old. While on the Late Show with Stephen Colbert, Amanda told Stephen that she hasn’t slept in two months because she’s trained him to need a warm body to fall asleep on.

On being nominated for an Oscar
It’s the second highest award in the land to be nominated, I don’t care if I win. The nomination is enough. I mean it until I get there.

How she prepared for the role
I read Citizen Kane the script. I watched Marion Davies’s [films]. The Philadelphia Story is still my favorite black and white movie. Laurel and Hardy. I didn’t want to imitate anybody and I wanted to feel grounded. I got to do the New York accent.

On if she was prepared for her second child
I didn’t read up on anything. I’m just going with the flow. I haven’t slept for two months.

[When he gets tired] I put him on my chest and I let him fall asleep with the warmth of my body. He cannot fall asleep unless there is a warm body. I have trained him to do the opposite of what I trained my daughter to do. I have failed.

I’m scared that when I put him in his crib after he’s asleep that something bad is going to happen. I’m still in that phase. I hate it. Remind me to never have another baby.

On if she agrees with Cher that they should do another Mama Mia
Definitely. If it was up to me there would be eight Mama Mias.

I was both excited and confused when Amanda talked about The Philadelphia Story. TPS is my favorite comedy of all time, I can’t tell you how many times I’ve seen it. However Marion Davies isn’t in it. Mank wrote it so I guess that was Amanda’s reference for her prep. But how she strung her answer together tripped me up until I realized, she’s talking like a mother of a six-month-old who hasn’t had any sleep. Boy, I remember those sleepless months. They were awful, I don’t care how many rose-colored baby memories I paint them with. I kind of remember that crib fear, too. All the baby books and classes train you for the worst-case scenario and those blended with sleep deprivation just add up to crazy making. I’m sure her anxiety and OCD are helping to compound the problem as well. I hope a little distance will help her relax. It’s funny, though. Amanda talked about the baby needing to fall asleep on a warm body and my first thought was – let him sleep on Finn! But Finn probably has stuff to do, I realize.

The discussion on Mama Mia was great. Amanda said “the story has to be there, of course” and Stephen just shut her down, saying everyone is just there for the music. He said the movies are just “a champagne party and then people show up and sing your favorite songs.” That should absolutely be the tag line for the next film. They go on to suggest future casting and Amanda suggests Hugh Jackman and now all I can think about is: how the hell has Hugh Jackman not been cast in Mama Mia yet?