Courteney Cox on the Friends reunion: ‘it was so unbelievable, so emotional’

Courteney Cox called into the Ellen DeGeneres Show from London on Thursday and spoke about the upcoming Friends reunion. We learned last month that the long anticipated and much postponed reunion show had filmed finally, but little else has come out. Matthew Perry originally posted a photo to his Instagram from backstage but that was quickly taken down, leading one to believe that they are controlling the press on this as closely as possible. Courteney is, I believe, the first to speak about the show since it filmed. David Schwimmer told Graham Norton last month he was leaving to film it. He did offer one morsel, that the show was unscripted and everyone would be themselves, but there would be one part in which the whole cast “read something.” Now, post filming, Courteney gave no content information, but she did say it was a very “emotional” and “unbelievable” experience for them to be back together on their old soundstage.

For Courteney Cox, taping the upcoming Friends reunion was nothing short of an “unbelievable” experience.

“It was so emotional,” the actress, who played Monica Geller on the hit NBC comedy from 1994 to 2004, said while appearing on The Ellen DeGeneres Show Thursday.

She continued of the special, taped last month, “It’s an unscripted reunion, but we got to be on Stage 24 for the first time, all of us, in like … 17 years.”

Cox, 56, admitted that she has “the worst memory,” but during her time on Stage 24 with the rest of the core cast — Jennifer Aniston, Lisa Kudrow, Matthew Perry, Matt LeBlanc and David Schwimmer — “everything came up that I [had forgotten] about.”

“But it was great. It was really fun,” she continued. “We had a lot of special surprises, and it was fantastic. It really was.”

Cox also dished on the iconic fountain scene in the show’s opening credits, saying it “definitely wasn’t” her idea but that “somebody thought that would just be really fun.”

“We were in that fountain for a long time,” she said. “And let me tell you what happens: It’s not fun to be dancing in a fountain for hours and hours.”

“I remember Matthew Perry saying at one point … ‘Can’t remember a time that I wasn’t in this fountain,’ ” Cox recalled.

Forgive me, my Bitches, but I am once again changing my tune on the Friends reunion. With all the back and forth, I’d lost my initial enthusiasm for the project. It began to feel forced and I didn’t think it would live up to the hype. When I read this headline about Courteney talking about how “emotional” it was to be back together, I thought she was laying it on a bit thick, since we had photos of them coming together and “breaking Instagram.” I don’t mind nostalgia, as long as it’s not fabricated. But then I cried at a gum commercial, and I realized, this reunion is probably exactly what people want to see as quarantine ends. To clarify: when I saw this Extra gum commercial, it prompted me to text my girlfriend because I realized I would be fully vaxxed and 14 days out by her birthday. So we made plans and it made me emotional. I have plans to see my parents when school ends and that makes me emotional. The idea of coming back together is emotional and while I’m sure the reunion was always going to be a poignant event for the cast, I’ll bet it was dramatically more so after last year. I know Courteney and Jennifer Aniston were in a bubble together. I don’t know if Lisa Kudrow was as well but we know the men weren’t. Courteney didn’t even see her own boyfriend for nine months during lockdown. So for everything this reunion has been through and all the stop and starts, it may be the perfect post-lockdown reentry. And it will be emotional for the fans as well. Because we will be reuniting with our Friends… finally.

Unfortunately, we still have no idea when it’s airing. 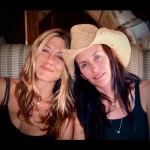 8 Responses to “Courteney Cox on the Friends reunion: ‘it was so unbelievable, so emotional’”