Lindsay Lohan ‘collects’ vintage jewelry: ‘I used to be impulsive. I’m not anymore’ 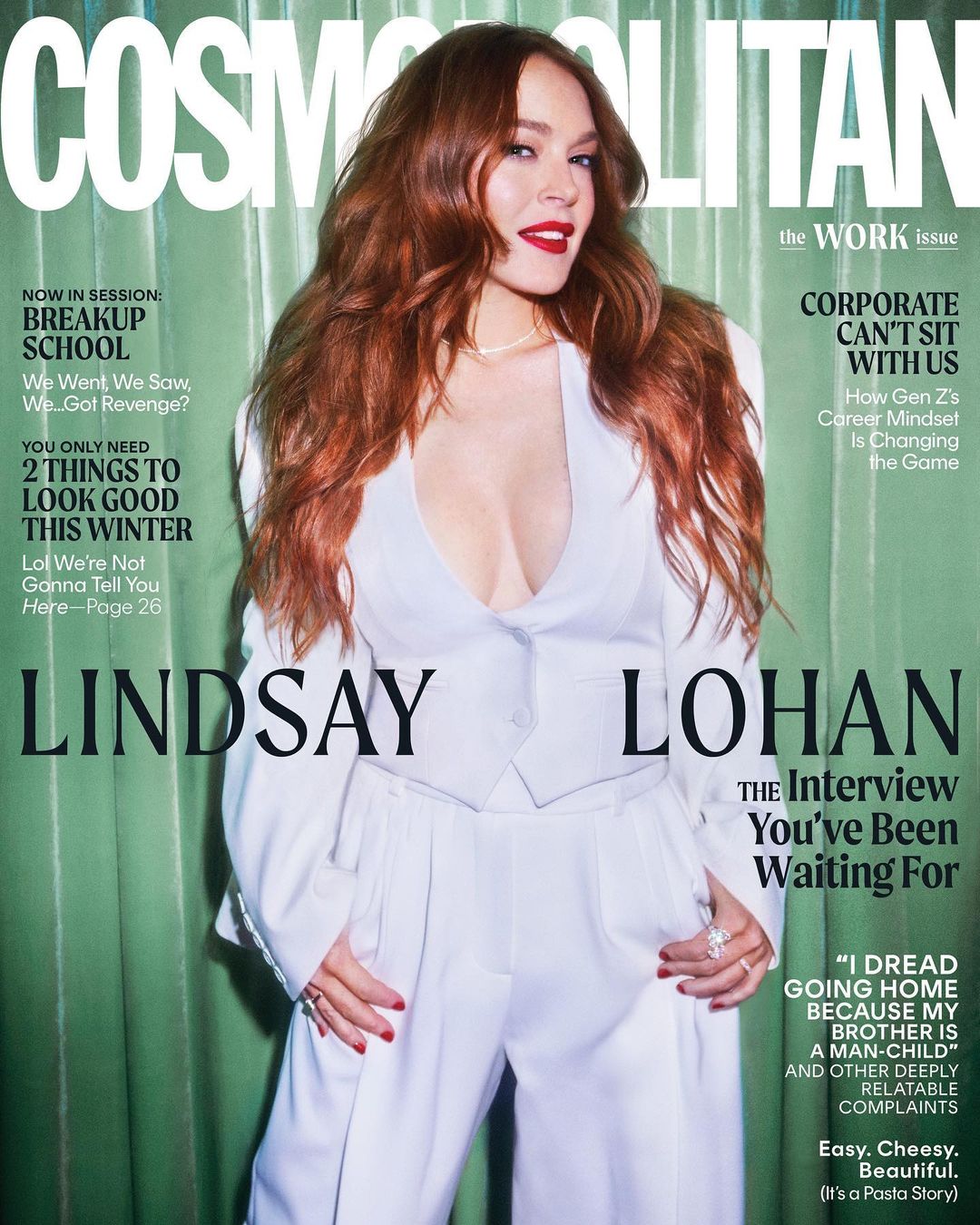 Lindsay Lohan covers the latest issue of Cosmopolitan to promote her Netflix holiday movie, Falling for Christmas. This Netflix movie is part of Lohan’s big comeback – she has a multi-picture deal with Netflix, a podcast (“The Lohdown”) and she’s narrating an Amazon Prime dating show, Lovestruck High. If Lindsay has “gotten her act together” in the larger sense, more power to her and God bless. Tons of terrible/problematic dudes get second acts, third acts, fourth acts. Why not Lindsay? I do wonder if there’s turmoil behind-the-scenes though, just because the past is prologue, and her “past” wasn’t even that long ago – remember her disastrous MTV series about her Mykonos club? That was 2019. That time she harassed a refugee family and tried to kidnap their child? That was 2018. Anyway, this Cosmo piece was pretty soft-focus. Some highlights:

Her skincare: “I’m big on nonintrusive facial experiences, anything I can do. I love lasers. I just started Morpheus8, which I’m obsessed with.

Her thoughts on social media: “I don’t even know. There’s too much of it. No, it is nice. Because now I feel like…when I first started out in the business, none of us had a say in how to control our own narrative. There were paparazzi pictures, and then people ran with it. So I think it’s really good that in this day and age, people can say who they are and who they want to be. And I admire and appreciate that. I’m a little jealous because I didn’t have that. But I think it moves really fast and I just try to keep up as best I can. And I check everything before I post it. I’ll send it to people. Because you have to… You [also] have to take everything people say with a grain of salt and just be you. And slow down, because everyone’s so quick right now. People just don’t stop. You’ve got to chill.

What her home life is like in Dubai: “I cook a lot. I follow this @EatingHealthyToday Instagram and they do these really great healthy meals. I cook a lot of Italian. I do a lot of pastas. I do a lot of an Arabic dish called machboos. It’s chicken with rice and vegetables. I do a really good borscht soup. I also go to bed really early. 9:30.”

Whether she sleeps well: “Yes, except when I got here to New York. I think it was because of anxiousness about getting up on time. But I need my seven to eight hours of sleep. When I’m filming, I can get away with six sometimes if we have really early calls, but I like my sleep and feel better when I get it.

Working on a Netflix movie: “It was really comforting to me, when I got the script, to see a movie that was a rom-com because it’s always fun to work on something lighthearted and family-oriented that makes people happy and provides a bit of an escape. And I was excited to kind of come back, to do something with Netflix, who is a big family in a way. It was the right fit for me, especially to be able to executive produce it.

What she collects: “Purses. Vintage clothing. And vintage jewelry too, actually. If I see something, I’ll wait on it, and if I keep thinking about it a week, two weeks, three weeks later, then I will go get it. So I’m actually really good. I used to be like, get it right away. I used to be impulsive. I’m not anymore.

“I used to be impulsive” – girl, you used to steal jewelry!! She would go to Cannes and hop from yacht to yacht, doing cracked-out jewel heists. She would steal jewelry from whatever house party she was invited to. Some of the jewel heists she pulled are legendary. I would love to know if she’s kept all of the jewelry she’s stolen over the years.

I also thought her answer on the social media question was kind of interesting too, because she was such an early adopter of Twitter. She was one of the first celebrities to use Twitter on a daily basis, and she became so famous for her late night strung-out tweets, which she would then delete when she sobered up the next day. This interview hit me with such a wave of nostalgia, honestly. I remember those late night crack-tweets and all of those insane jewelry heists. Gossip memories.

28 Responses to “Lindsay Lohan ‘collects’ vintage jewelry: ‘I used to be impulsive. I’m not anymore’”