Celebitchy’s most commented and our favorite stories of 2021 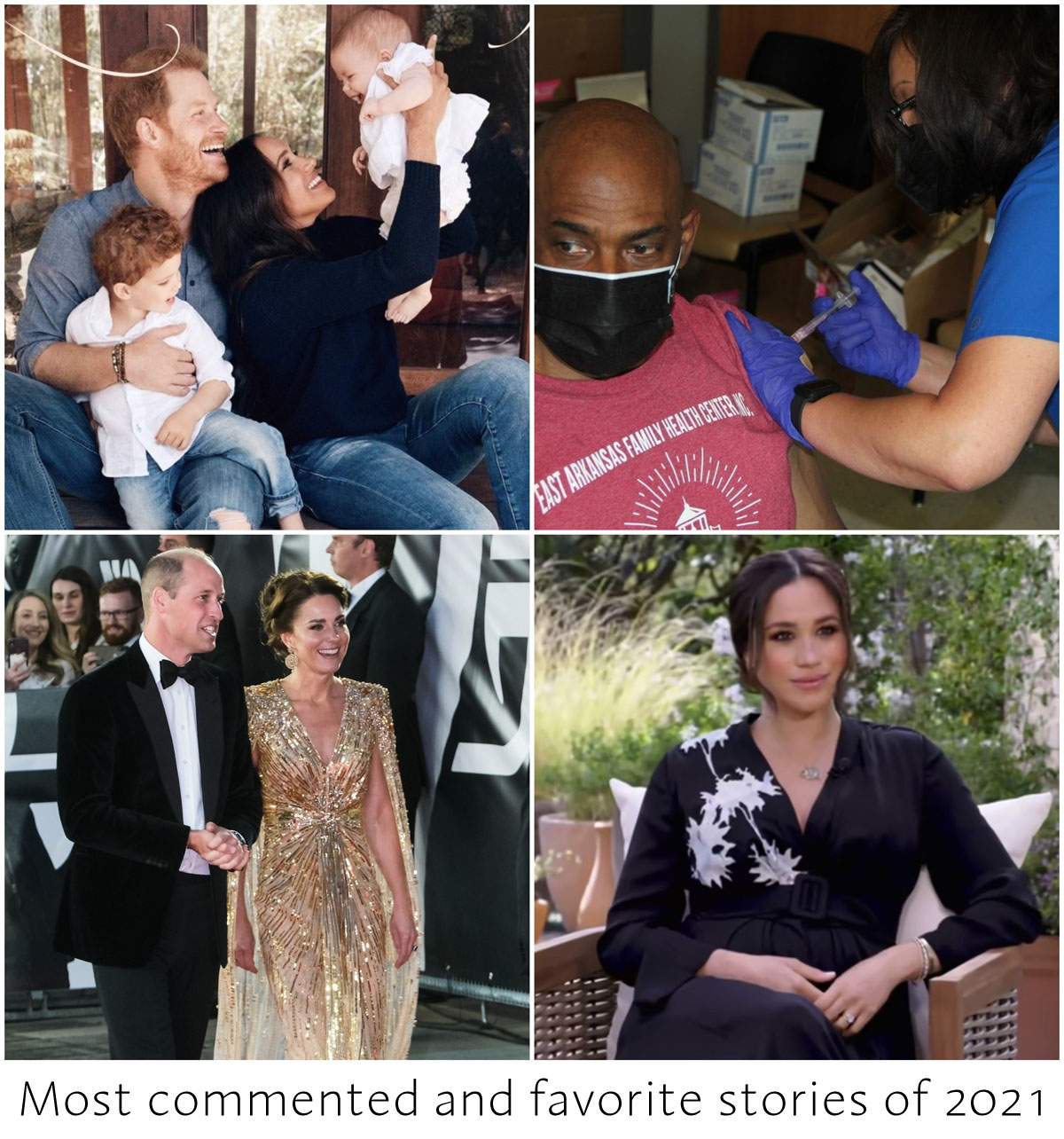 Every year when I write these posts I look back on the most commented posts of the year before. Just last year I added our favorite posts to this list because the top 20 were all stories about the royals. That was the case again this year so we’re adding our favorite stories again, as discussed in our last podcast. (That section is the same as in the #111 podcast post.) Last year the most commented story was Harry and Meghan’s announcement that they were stepping back from royal life. The Sussexes dominated again this year, especially when they spoke their piece to Oprah, welcomed a new baby and shared their joy with us. Here are the most commented and our favorite stories of 2021.

Before and in the months following Prince Harry and Duchess Meghan’s interview with Oprah, the palace did the most to smear Meghan and punish the Sussexes. In February, following the Oprah interview announcement, Harry and Meghan were stripped of all their patronages by the Queen. In March, a few days before the interview aired, there was the ridiculous story that Meghan bullied aides, which always seemed to change and never included any concrete details. Right after the interview aired, a source told Richard Kay at the Daily Mail that Duchess Kate felt she was “thrown under a bus” by Meghan, after Meghan set the record straight about Kate making her cry. The Daily Mail announced in June that Buckingham Palace was going to actively brief against the Sussexes when it was obvious they’d been doing it through “sources” up to that point. In June we also heard that Prince Charles was planning once he was king to change a royal law called The Letters Patent, which would deny Archie and Lilibet royal titles. In June there was another hit piece against Meghan with vague accusations about how she made employees feel. The stories about the ridiculous investigation into Meghan’s alleged bullying didn’t make it into the top 20 most commented this year because most of you realized how fake those claims were.

19, 17 Duchess Kate’s family got some attention

Gary Goldsmith, Duchess Kate’s dodgy uncle, gave an interview in April trashing the Sussexes and claiming that Kate was the best royal ever. He also said that “when the Queen steps down, things need to pass to William and Kate.” This followed his interview in March responding to the Oprah interview in which he said, repeatedly, that he didn’t believe Meghan.” Another story about Kate’s family made it into the top 20. In June we heard that The Queen was not impressed with Carole Middleton when she met her in 2007.

The Cambridges released their tenth anniversary portraits in April, which featured Kate wearing a new $12,000 necklace. In June Kate met with Dr. Jill Biden at a school in Cornwall, where Kate fielded questions about her new niece, Lilibet. In June we also heard that the Cambridges were looking for a home in Bucklebury close to the Middletons, which sounded like code for a separation. That story quickly faded from the headlines. The Cambridges, Prince Charles and Camilla attended the No Time to Die premiere in September, where Kate was praised for her gold Jenny Packham gown and glamorous styling.

16, 9 Prince Harry reunites with his family

Two stories about Prince Harry reuniting with his family made it into our top 20. He returned to the UK in April for Prince Philip’s funeral. The visit was generally considered tense, with Duchess Kate being credited for bringing the two brothers together. He also came back for the Diana statue reveal in July. Prince Harry and William seemed at ease during that visit. Duchess Kate was thought to have been told to stay home for that event.

The Me You Can’t See came out in May, and Harry didn’t pull his punches in that special. He spoke openly about his childhood grief at losing his mother, and how his family ignored his pain and expected him to act like everything was fine. He also talked about the parallels between his mother’s death and his wife’s treatment by the paparazzi and the media. We received an announcement in July that Harry was working on a memoir, to be published in 2022. Of course the press freaked out about that.

6, 3, 2 The Sussexes had a new baby and shared their holiday card for charity

The Sussexes welcomed their second baby, Lilibet Diana, in June. After that they were repeatedly nitpicked and criticized over whether they got the Queen’s permission to use her nickname for their daughter. In September they were featured on Time Magazine as one of the most influential people covers, showing that the American press appreciates the Sussexes and their charity work. Just last week we saw a beautiful photo of their family, released for the holidays on behalf of several charity organizations.

1 The Sussexes spoke their truth to Oprah

The Oprah interview was this year! Can you believe it? The open post for that story was our most commented in 2021.

Our favorites: The hype over the Keenwell Institute

One of Kaiser’s favorite stories from 2021 was the Keenwell Institute. There was so much hype ahead of the announcement including a ridiculous commercial featuring footage of Nelson Mandela, Malala and JFK.

From Kaiser: Kate launched The Royal Foundation Centre for Early Childhood, a “research institute” housed within Kensington Palace. There was a “report” called Big Change Starts Small. The report amounted to “the early years are so important, you guys.” I called it the Keenwell Institute for Buttons and Early Years. We’ve barely heard anything about it since. Kate did a couple of events around it back in June and then nothing.

Our favorites: Sophie, The Countess of Wessex, pitched herself as a senior royal

From Kaiser: Sophie tried to make herself into a senior royal in 2020, and she was clearly pitching herself as a replacement to the Sussexes. Then after Prince Philip passed away, Sophie and Edward went on a publicity tour, giving interviews and taking swipes at Harry, Meghan and Oprah. Sophie pitched herself as the Queen’s “rock” and her favorite in-law. Sophie’s people also claimed that “Philip would have wanted her” to seek the spotlight. Sophie was thirsty as hell. And then she just stopped. I tend to believe Prince Charles told them to stop. Probably around the same time he told Edward he would never be Duke of Edinburgh.

Our favorites: Celebrities who don’t bathe themselves or their kids

Then Jake Gyllenhaal did that insane interview with Vanity Fair in early August where said he finds “bathing to be less necessary” and that “we naturally clean ourselves.”

Kristen Bell and Dax Shepard said they don’t bathe their kids until they smell bad and then other celebrities like The Rock and Jason Momoa assured us that they do bathe. It was crazy and there never should have been a controversy over not bathing.

Our favorites: We got vaccinated

I also wanted to include the story that the vaccines were distributed this year. It was less than a year from the pandemic to the development, testing and emergency use approval of three different vaccines in the US that are incredibly effective against covid. That was a scientific triumph that we’re so grateful for.

Thank you for commenting, reading and listening to our podcast! (It also helps us out if you subscribe to our mailing list. I only send one email on weekdays after lunch and you can subscribe here.) We hope you had a relaxing and safe holiday and that you have a great 2022!